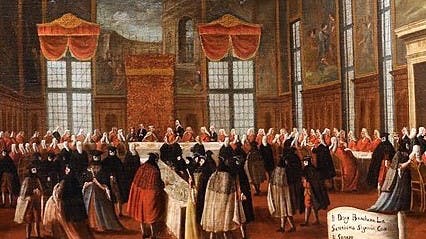 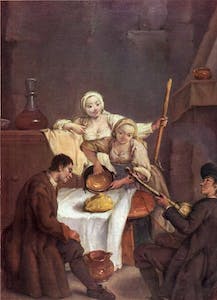 The history of the Venetian cuisine has very ancient roots, when the local people escaped the raids of tribes from northern Europe and the Orient, abandoning the mainland to take refuge “on the water”, in the many islands of the lagoon.

Water for the Venetians meant political, commercial and nourishing power, but also a workforce to turn the shovels to grind the wheat and to make the polenta which was, until the mid-sixteenth century, the main source of survival for residents.

It was a poor cuisine, but refined thanks to the use of spices, rich in recipes prepared with fresh and fragrant

vegetables of the islands, the game hunted in sandbank, the fish of the lagoon and, no less important, the rice, the main food come from the Arabic world, which lent itself to many combinations. The common thread was always water…

The fact that Venice was an important maritime Republic explains why it presents, in its culinary traditions, a variety of dishes where autochthonous and imported elements merge giving life to a cuisine with delicate flavors, but very tasty and appetizing.

From this, the desire to discover the main and appetizing typical dishes of the Venetian tradition.

Famous were the banquets offered by the Serenissima to foreign princes and ambassadors who arrived in the city, during which they were introduced the use of the “PIRON” (fork, see the photo on the right), brought from Byzantium, and the towel, in an era where the gentlemen cleaned their greasy fingers in their clothes or on the tablecloth.

Discover and taste the typical Venetian recipes with € 79, click here!