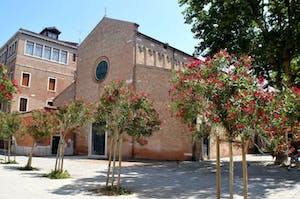 The church of sant’Agnese is a typical Byzantine building. The gothic façade looks onto the street we are walking on, which is called Rio Terà Antonio Foscarini. Different from a calle, a rio terà is Venetian for interred canal; so, until the 19th century, you would have needed a boat to cross it but like several other waterways it was transformed into a pedestrian area after Napoleon took over the city. This rio terà is dedicated to Antonio Foscarini, a Venetian diplomat who secretly held an affair with the wife of an English count residing in Venice; the countess’s home was frequented by many high-ranking international people, among which the Spanish ambassador’s secretary, to whom Foscarini was accused of disclosing secret information discussed in the Senate. Despite his innocence, he was imprisoned and sentenced to death in 1622; he did not reveal the real reason of his midnight escapades as he thought it might have created more serious diplomatic issues with the English delegation. 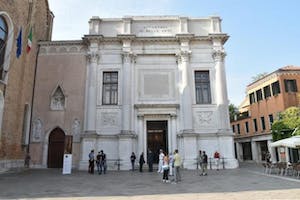 Founded in 1750, the Accademia was once the place where young aspiring artists learned painting, sculture and architecture. When the Venetian Republic fell to Napoleon in 1797, many churches were looted or destroyed; sadly, a great number of paintings were either stolen, ruined or sold in the general chaos. It was then that the Accademia art gallery became a true stronghold for the preservation of many paintings in the city. Moreover, a decision was taken to privilege those works by Venetian painters from 1300 to 1700, and today, in fact, the Galleries exhibit masterpieces by the likes of Bellini, Giorgione, Tiziano, Tintoretto, Carpaccio, Veronese, Tiepolo and many others.