The Church of Santa Maria Formosa 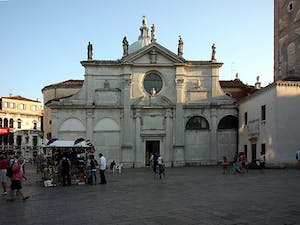 As many early churches in Venice, this too originally came from an apparition in a dream. The Bishop Alberto Magno arrived in Venice in the 7th century AD, and allegedly dreamt that the Holy Mary had told him to look out for a cloud stopping still in the sky; wherever its shadow beat on was where the church should have been built. Since the priest only talked of a form of the Madonna in his dream, the Church aquired the name of Formosa, although formosa also means ‘shapely’ in Italian and it’s been suggested the name comes from a lost painting of a rather buxom-looking Madonna.

As many churches, Santa Maria Formosa was built at various intervals, you’ll notice the main façade looking onto the campo is 18th century baroque in style, whereas the entrance on the canal side is more classical, and so somewhat earlier. If you’re on this side, you’ll see a grotesque head above the entrance which was built to fight off the devil, who wanted to enter the church and bang on the bells in the tower to create chaos amongst the people, since the day’s work schedule was broken down according to well-established bell tolls. 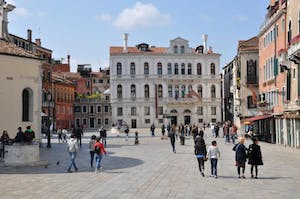 Since the 9th century, every 2nd of February all Venetian women who were to be married within the year would dress up and take part in an event of purification; one year, it went rather wrong when a group of pirates stormed the cerimony and kidnapped 12 of the girls; the Venetians, however, chased the kidnappers and managed to save the girls before they were shipped away. And so, every year Venice began to celebrate the Festa delle Marie in this square, a new celebration in honour of the Holy Mary; the 12 most beautiful girls from the city’s poorest families were chosen and entrusted each to a wealthy family, who would clothe them in rich garments and jewellery and parade them along the Grand Canal. This in time attracted men from all over Italy and other European cities. Given the high visibility and honour of the occasion, it wasn’t long before fights broke out amongst the poor families or the rowdy male public, and so the girls were substituted by wooden carvings of female figures, called Maria de Tola, Plank Mary, which is how Venetians sometimes still refer to dull women.

The elegant red building separated by a small canal is the Museo Querini Stampalia. The Querini family were one of the oldest and wealthiest in Venice, and often it was expected that someone from a founding family would become Doge, that is, the highest position in the city. However, back in 1310 a famous plot to overthrow the standing ruling class was thwarted by the Doge’s soldiers, and among the key plotters was the young Marco Querini; he was immediately executed, and the family was for ever excluded from running for the dogeship. A relative of his, however, managed to escape and ended up on the island of Stampalia in Greece, hence the name Querini-Stampalia. Much time passed, and in the 18th century the last family heir Giovanni Querini Stampalia, a scientist, man of letters and silk merchant left this building to Venice, specifying in his will that it should be used ‘especially for evening assemblies of scholars and scientists’. Today, the first floor is one of the most loved public libraries by students, exactly as he would have wished.