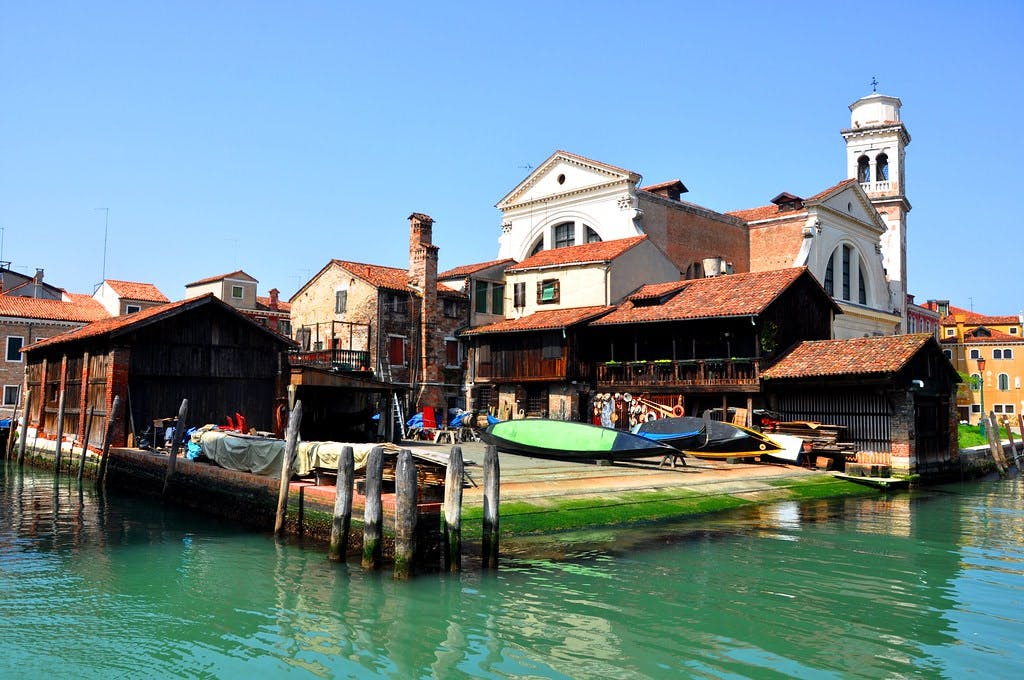 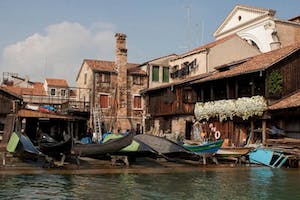 Gondolas might be the most recognisable boat in the world. But not many, not even Venetians, know what an incredible piece of engineering it is; there is certainly skill in steering it but it pales to that required to building one, which takes about 500 hours, rather a long time considering a gondola’s life-span is of only 20 years. Squero is the Venetian shipyard where gondolas are built, this is definitely the most famous, the Squero of san Trovaso; it is one of the few surviving historical squeri in Venice and surely the most visible and visited. The building looks more like a mountain hut, and for good reason. Remember that Venice did not have much wood available in its surroundings and would often import it from mountainous regions, where merchants might easily have drawn a sketch of the house exteriors there, which have evidently found their way back here.

In the past, it was not easy to get wood in Venice, simply because there were no large woods and forests around the lagoon. It was necessary to travel to the mainland, and in the past here one would have seen very long rafts – zattere in Italian – loaded with tree trunks, which from the mountains, passed down the rivers, into the lagoon and finally, along the Giudecca Canal, to dock on this fondamenta, the fondamenta of the Zattere in fact. If we took a dip in the past, the calm of the many people we see today walking or sunbathing in the summer would turn into a noisy bustle of merchants, carpenters and porters intent on sorting the huge quantities of wood that have just arrived. Furthermore, these rafts would also come to deposit huge loads of salt which would then be stored in the Magazzini del Sale, the immense salt warehouses a little further along the seafront, testifying to Venice’s successful dependence on its natural resources. Nowadays, the rafts that once traveled through this Canal have been replaced by large cruise liners, which undermine the foundations of the foundations and pollute the air, but at the same time guarantee a tourist flow of great interest to the city. 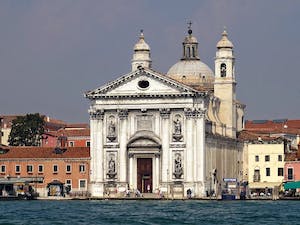 If you turn towards the Giudecca, you will be immediately attracted by the elegant façade of the Redentore Church, built by Andrea Palladio, the architect symbol of the Venetian and Italian Renaissance, a lover of classic proportions, elegance and simplicity at the same time. In the 17th century, however, the mold of the Palladian renaissance was replaced by the Baroque style that expanded into Europe with its pompous exterior architecture and opulent interior gold decorations. Palladio’s name in Venice was replaced with that of Massari, a young architect who rebuilt, in the 1700s, the Gesuati Church (officially Santa Maria del Rosario) here. This church overlooks the Giudecca Canal, the strip of land on the other side, almost in an act of defiance to the Redentore Church. It is on the day of the Redentore, a religious festivity held in July in honour of the end of the plague in the 16th century, that a bridge connects the Zattere to the Giudecca; public boats stop running and the whole canal is carpeted with boats, canoes and yachts where people eat, drink and dance to music before enjoying the midnight fireworks. Truly a unique, wholly Venetian experience.