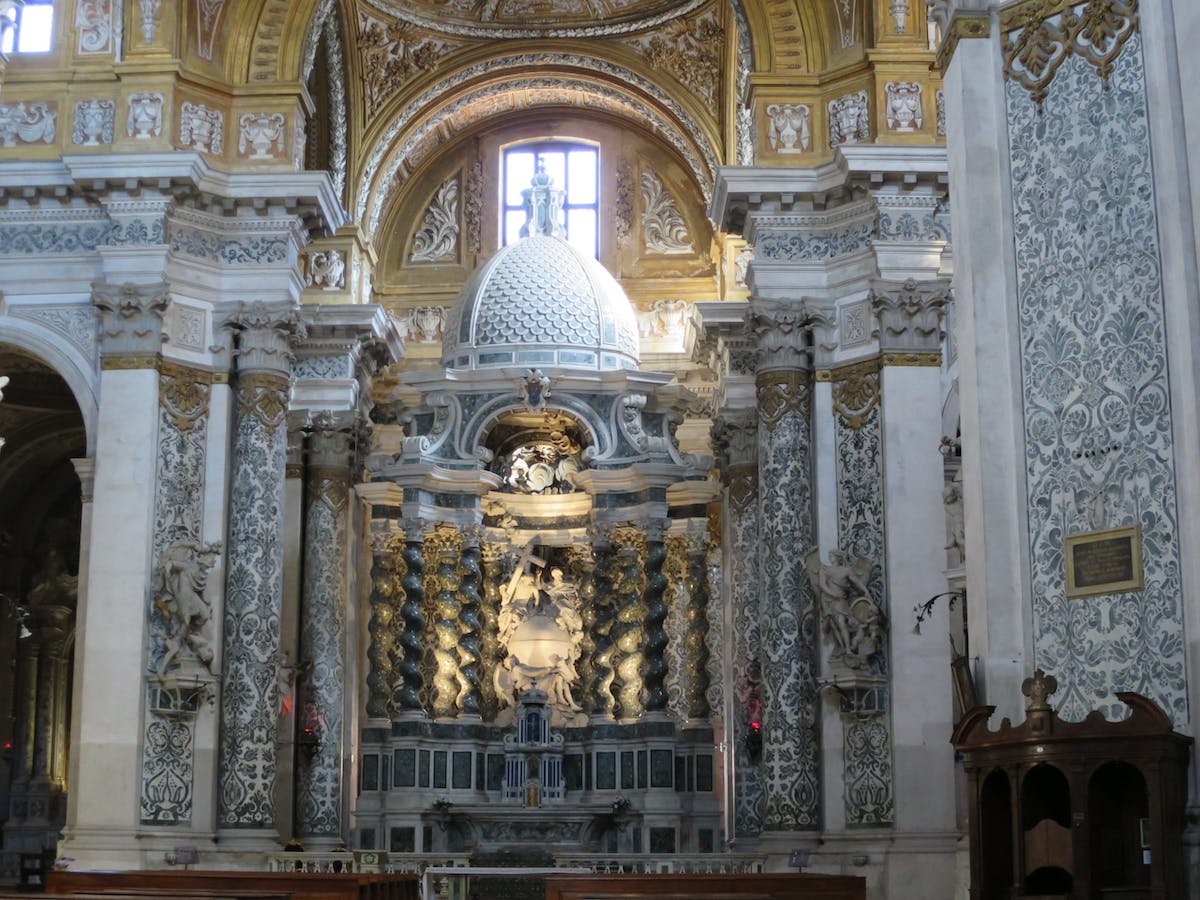 The story of this campo began around a thousand years ago, when the Crusades were started. Many of the crusaders came back with all sorts of battle wounds and injurie. Therefore, an association of monks was formed, whose job it was to take care of the veterans. The big building to the right and those opposite the church were all property of the Crociferi, whose intentions were originally very honorable; but once the crusades were over, they had more time and more money which was spent in less honorable ways. And so, in the late 17th century the Jesuits restructured the lavish façade of the church to show off their own wealth. This campo was home to many guilds and corporations, famously the Scuola dei Sartori (tailors). Palazzo Zeno was built at the end of the 14th century by Carlo Zeno, “Capitano da mar”, hero and winner of the war fought by Venice against Genoa in Chioggia. The beautiful Gothic facade of the palace is preserved intact and is surmounted by two elegant obelisks dating back to the 17th century. The Palace underwent several changes over the centuries, the most important by the architect Antonio Gasparri. Many of the rooms are frescoed or decorated by the greatest artists of the period.

The Doge Marino Falier, an infamous figure in Venetian history, once held a ball in his house in Campo Santi Apostoli, and a young man began to importune one of the housemaids and so was asked to leave; which he did, but not before calling Falier’s wife a harlot. The young man was fined, whipped and sent to prison; Falier complained to the Judiciary Council that the punishment was not adequate but to no avail, and so, plotted to seize complete control of the state. His scheme was uncovered, and he was immediately decapitated in public.

The legend tells that the church was built by san Magno, who in ecstasy saw the twelve apostles who commanded him to build a church where he had found twelve cranes. The Corner chapel, with marbles and very fine decorations, houses the remains and of Mark and Giorgio Corner. Beautiful altar with ‘the communion of Saint Lucia’ by Tiepolo. On the two side walls you will find ‘the Last Supper’ by Cesare da Conegliano and ‘the Fall of the manna’ by Paolo Veronese and completed by his heirs.

Not too far from the Rialto Bridge you’ll see a plaque dedicated to Marco Polo, who apparently lived here. The great explorer left Venice as a teenager in 1271 on a voyage that has become legendary. With his father and uncle, after three and a half years he reached Beijing, in China. On the way, they were escorted to Kublai Khan, emperor of Mongolia, who was so impressed with Marco that he employed him as his ambassador, a job that the Venetian kept for 17 years. On his return to Venice, he was captured by the Genoese navy and sent to prison; here his cellmate was a young storyteller, who decided to write Marco’s adventures down and turned them into a bestselling book, the Milion; it has this name because people would flock to his home to hear the million incredible stories of his epic journey to the East.

Visit the hidden Venice at your pace with only € 15, click here!