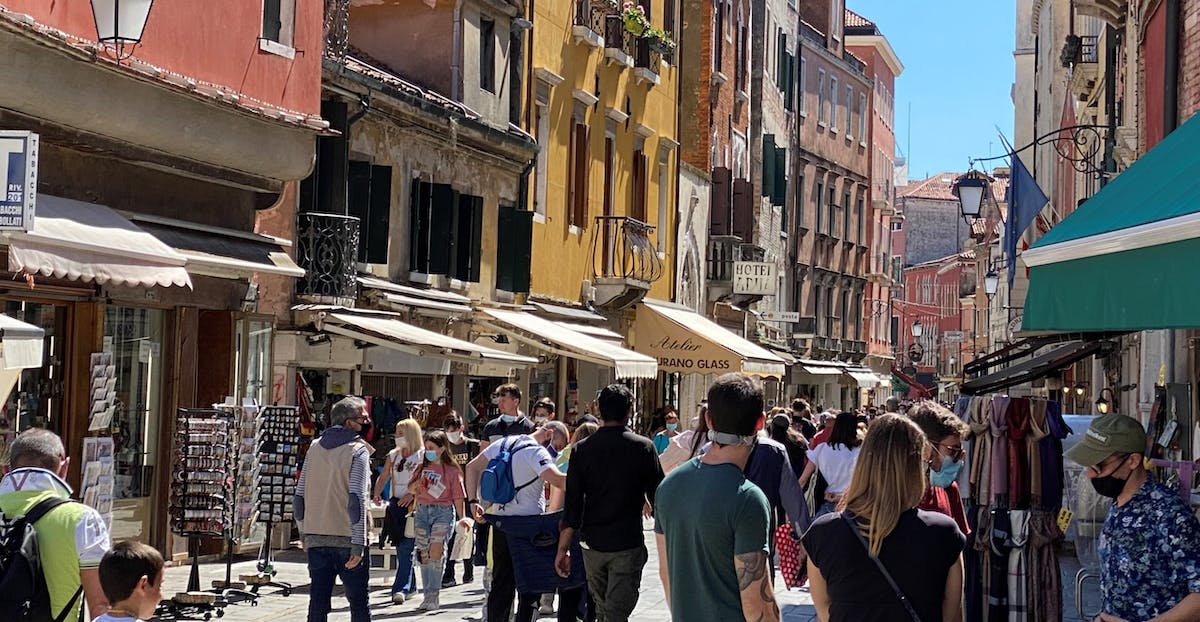 This is Lista di Spagna. The name Lista comes from the Italian verb meaning “to delimit”, and it represented a part of the street marked by white Istrian stones, within which foreign diplomats could enjoy diplomatic immunity. Here, where today we find the Grand Hotel Principe, was the Spanish Embassy to Venice. As well as being Lista di Spagna, this street is also a rio terà, which signifying that once a canal flowed through here and was later interred.

Let’s stop a second in Campo San Geremia, and count the well-heads: there are 4 in total, a small record among Venetian campi. The Church of San Geremia actually hosts the body of Santa Lucia, which was moved here after the church dedicated to her was destroyed to make way for the train station. Given its size, the square became a popular venue for the bull-chase, an extremely dangerous sporting event which was introduced by the Spanish ambassador, who lived only a few steps from here. The big white baroque building to the left of the church is Palazzo Labia; it belonged to a hugely wealthy family, who enjoyed throwing fancy parties, where they would also throw silverware out of the window to impress their guests, shouting “L’Abia o no l’abia, sempre sarò Labia”, a play on words which translates to “Whether I have stuff or not, I’ll always be Labia”. Apparently nets were spread below the window beforehand and servants would have to race down to collect the objects for the next party.

The Ponte delle Guglie dates back to 1285, although it has undergone many reconstructions since then. The name  comes from the four obelisks, called “guglie”, placed at the corners of the balustrades. This addition was made in the 19th century, as before then it was referred to as Ponte di Cannaregio, after the canal Rio di Cannaregio that flows under it, which connects the Lagoon to the Grand Canal. Initially, like so many bridges in Venice, it was a drawbridge, with no handrails and was made of wood, making it prone to fires, which is why it was eventually rebuilt in stone.