In 1113 the Mastelli family, a merchant family who traded in silk and spices, arrived in Venice from Peloponneseus in Greece, and here they bought much of the property in this campo, which is called Campo dei Mori in their honour. They were called Mori, Moors due to their dark complexion, and the three Mastelli brothers can be seen in Istrian stone nestled in the wall near the bridge, plus one of their servants with a cammel to show their distant origin. The statue on the corner of the wall next to the Osteria is the eldest brother Rioba, whose nose fell off and was replaced with a piece of black metal. Some say that rubbing the nose will bring good fortune, and there’s no harm in trying. 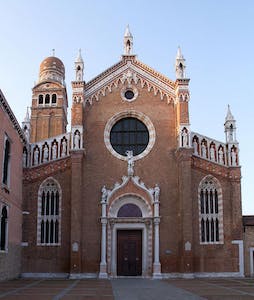 This is the Church of Madonna dell’Orto, although officially entitled to St. Christopher, the protector of travellers. Back in the 14th century a statue of the Virgin Mary was built by a local sculptor in the area, and was soon believed to be ‘miraculous’; had you been around then, you would have been swarmed by floods of devotees queuing outside for a miracle. The School of St. Christopher, an organisation run by wealthy merchants who owned the building to the left of the church, decided to buy the statue off the sculptor, and quickly made a great deal of money from the outpour of public offerings, which they then invested in expanding and embellishing the church; the church itself was run by a group of friars called the Umiliati, the “humiliated”, who preached a frugal, chaste way of life; unsurprisingly, they were soon expelled from the city for promiscuous and fraudulent behaviour. The pavement in front of the entrance might seem peculiar today, but this was how pavements in most Venetian squares and streets looked like in the past. In many poorer areas even this would have been too expensive, and you would likely have walked on wet, rammed earth all your life.