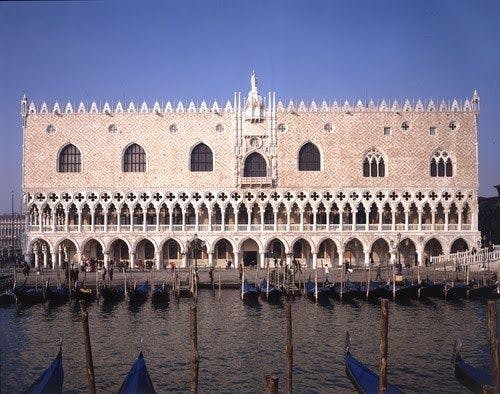 The Palazzo Ducale, in Piazza San Marco, is the main attraction of Venice with more than 2 million of visitors every year. A must-do to discover the splendor and richness of the ancient Republic of Venice. Inside the Palace there are some of the most important Italian artworks as “the Paradise” by Tintoretto or many masterpieces of Tiepolo. The palace is worth visiting just only for having mentioned these two artists!

After the magnificence and glory of the Doge’s rooms, you will feel the anguish and sadness of the prisoners that went down to the “Piombi”, the dark Venetian Prisons, from where only Casanova managed to escape! You’ll cross the infamous Bridge of Sighs to reach the jails, from there the condenmande admired Venice for the last time! Choose between a guided tour or, if you like feeling free, just take the skip the line ticket and visit it by your self! The Palazzo Ducale ticket allow you to visit also the Museo Correr in Piazza San Marco (in different days if you prefer, because the ticket is valid for some months!)

Two amazing options to choose: tour with a live guide or visit by yourself with the skip the line ticket! The guided tour starts daily from the clock tower. 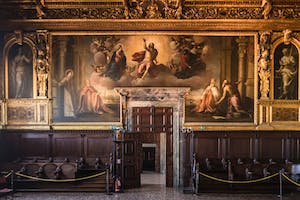 The Palazzo Ducale ticket allows you to visit also the Museo Correr in Piazza San Marco (in different days if you prefer, because the ticket is valid for some months!) In the Museo Correr there are also the National Archaeological Museum and the Biblioteca Marciana. One ticket for a complete overview of the Venice history in the golden age.
It’s highly recommend pre-order the tickets for skipping the long line that every day there are at the Palazzo Ducale.
From April to October you can visit until 9:00 PM and, on Friday-Saturday until 11:00 PM, visit at the sunset is something that you’ll never forget. From November to March the last entrance is at 8:30 PM.

Here the best seller tours to enjoy the Palace and its secular history.

The first to call this place his home was a man called Agnello Partecipazio. Most of his adult life, he had been fighting off attacks from the Longobards and found these islands out in the swampy lagoon a much safer place than any other too close to the mainland or to the open sea. Partecipazio built a small castle on this exact spot, and it was first and foremost a military stronghold, a castle ready for battle and siege. It looked nothing like a palace then, and far from what it is today. As Venice became richer and stronger over the centuries, the fort became larger yet lighter, and the grey solidity gave way to polychrome beauty. It was, after all, a statement. It amounted to saying, “we don’t need a castle, no one can ever attack us here.”

In time the two buildings would be unified, but Venetians understood early on the dangers of concentrating power into the hands of a single person, so a great number of offices were created, each with their specific mandate. The electoral and administrative systems became more and more complex over time, to ensure balance between all governmental bodies, and ensuring that the State and people came before any individual. 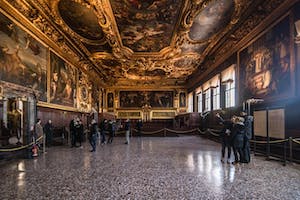 The political setup provided stability, and Venice’s power was for centuries unparallaled and much of it came from trading with a great number of countries and peoples, which enriched not only the city’s coffers but its culture and identity most of all. It was here that the great powers of the world met, through art as much as through commerce. The Palazzo Ducale is in fact a mixture of all architectural styles of different ages and locations, but it is never untidy or chaotic, there is a harmony which no other human building in the world has ever achieved.

It is why John Ruskin, the Englishman who loved Venice more than most once wrote that “It is the central building of the world.”

In 1600, therefore, a bridge had to be built to connect the Palazzo Ducale and the Prisons: the Ponte dei Sospiri, the Bridge of Sighs. Allegedly, the newly-judged convicts walking to their darkened cell, would look out from the window-gaps to the lagoon for one last time and sigh.

THE JAILBREAK OF GIACOMO CASANOVA

Giacomo Casanova was enjoying himself, travelling around Europe, meeting the most interesting people of the time, accepting invitations from the rich and famous, gambling, drinking, seducing girls, avoiding responsibilities and in general having a great time. In 1755, however, he was back in Venice. And, on a night like many others he was out and about town drinking and entertaining himself and those around him in the way he knew best.

The Venetian state, famously intolerant of any public misdemeanor, could only stand so much liberty from one man, even if it was Casanova, and so the secret police was sent out to arrest him on charges of debauchery and blasphemy. He was quickly sentenced to jail, and found himself confined in the Piombi, the Venetian prisons. However, even prison proved an adventure for Casanova, and life on the inside was not too bad, as he’d been allowed to move some of his own furniture into his cell and was regularly given proper warm meals, which was not customary of course.

However cushy prison could be for him, enough was enough. He quickly befriended a fellow prisoner, an abbot called Baldi, also a keen womanizer, and together they began digging a hole in the roof of the cell, through which they climbed out to make their escape. This took them to the Chancellery of the Palazzo Ducale, and as a guard stopped them and asked what they were up to, they pretended to be official visitors who had got lost during a tour of the building; they politely asked for directions to the exit, showed themselves out, got on the nearest gondola and frantically rowed to Mestre. 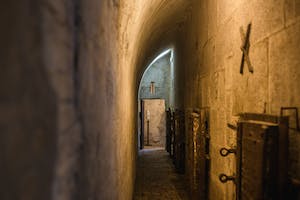 This, naturally, was not the usual treatment or the usual outcome for prisoners in the Piombi, as these were considered maximum security and conditions were seriously grim. In 1787 Casanova even decided to publish a book, “My Escape from the Prisons of Venice”. Many though believe that Casanova was allowed to escape, given the ties he’d cultivated with rich and powerful people around Europe. And what a crime it would have been to shut him up in a cell, and not to have him lead the life he led, do the things he did and write it all down for our own delight and entertainment.