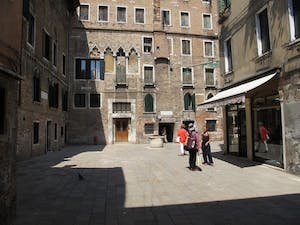 In Corte Seconda del Milion you’ll see a plaque dedicated to Marco Polo, who apparently live in this house. The great explorer left Venice as a teenager in 1271 on a voyage that has become legendary. Together with his father and uncle, after three and a half years he reached the city of Khanbaliq, which we today call Beijing, in China. On the way, they were escorted to the Kublai Khan, emperor of Mongolia and one of the most powerful men in the world, who was so impressed with young Marco that he employed him as his ambassador, a job that the Venetian kept for 17 years. On his return to Venice, he was captured by the Genoese navy, who were Venice’s naval arch-enemy, and sent to prison; here, however, as luck had it, his cellmate was a young storyteller who, fascinated by the tales of this traveller, decided to write them down and turned them into a bestelling book, which became known as the Milion; it aquired this name once Marco Polo had finally returned to Venice, since people would flock to his home here to hear the million incredible stories of his epic journey to the East.

Just before the Rialto Bridge is the Fondaco dei Tedeschi – Tedeschi meaning German people – a 15th century palace, which is owned today by Benetton which has turned it into a luxury shopping centre. The ties between Venice and the German world were historically very strong, and so a fondaco, from the Arabic for warehouse, was built to host the workshops of these nordic communities. In 1505 a fire destroyed it almost entirely, but in only three years it was rebuilt exactly as we see it today. For the occasion, Giorgione painted frescoes on the side of the Grand Canal and Titian on the side of the smaller side canal; both unfortunately have been the victim of time and cannot be seen today.

The Rialto Bridge, the first urban centre of Venice. It comes from the latin “rivus altus”, deep canal, referring to the Grand Canal. Dating back to 1180, it was initially a series of boats with wooden planks placed on top. It was then built in wood resting on stilts. However, on June 15th 1310, Bajamonte Tiepolo and other conspirators of a failed coup d’etat, broke the bridge to stop the Doge’s pursuing troops. It was then rebuilt as it was, but in 1444, during a visit by the Marquess of Ferrara, the bridge collapsed under the weight of the crowd who had gathered to see the parade along the Grand Canal. In mid-16th century a public competition was set to rebuild the bridge in stone; Sansovino, Palladio and other famous architects proposed classical projects with several arches. But the task went to the Venetian Antonio da Ponte, the only one to propose a single arch, and indeed he built it as we see it today. By unifying the two parts of the city on either side of the Grand Canal in a single arch movement, the Rialto Bridge has become the symbol of Venice’s unity and uniqueness.