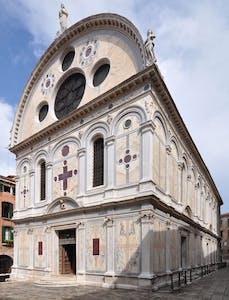 The Chiesa dei Miracoli is the Church of Miracles. The story of how it was first built is interesting, if not wholly true. A nobleman in the early 1400’s had a fresco of the Madonna painted in a nearby calle, which soon became the object of adoration by the inhabitants of the area. Soon after, a woman had been attacked by her husband with a knife, but she invoked the Madonna so loudly that the stabbing had no effect and she survived without a scar. To this, followed so many other miracles in the area, that soon the image was moved to a chapel built in honour of the Holy Mary; given the affluence of paying miracle-seekers, this chapel soon became the richly-coloured church we see today. The high number of external pillars creates the optical illusion that each side is actually longer than it really is. And here’s a teaser: The Miracoli is one of only two churches in Venice which is free on all four sides, we’ll let you discover the one in your own time. 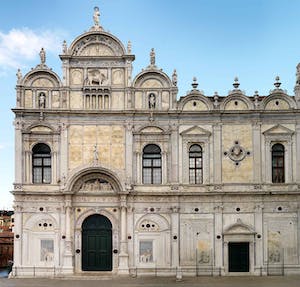 Between the bridge and the Church of San Giovanni e Paolo is a beautiful Renaissance façade of the Scuola Grande di San Marco, which Ruskin called ‘the most refined building in Venice’. The choice of bright marbles, spotted with porfiry red medallions, give a sense of serenity and calm; the whole feel is in contrast with the monochrome somber colour of the brick-façade of the Church next to it. There were once seven Scuole Grandi – Large Schools – in Venice, this one being perhaps the most prosperous and decorated. It was in essence a brotherhood institution, where painters, sculptors and artists of all kinds produced some of their finest works, that still today adorne the interior. In 1806, however, Napoleon closed all the Scuole in Venice, using them for all sorts of different functions. Nowadays, the Scuola di San Marco is home to Venice’s main hospital, which stretches all the way back to the lagoon and is certainly the most beautiful hospital any patient could wish to be in.