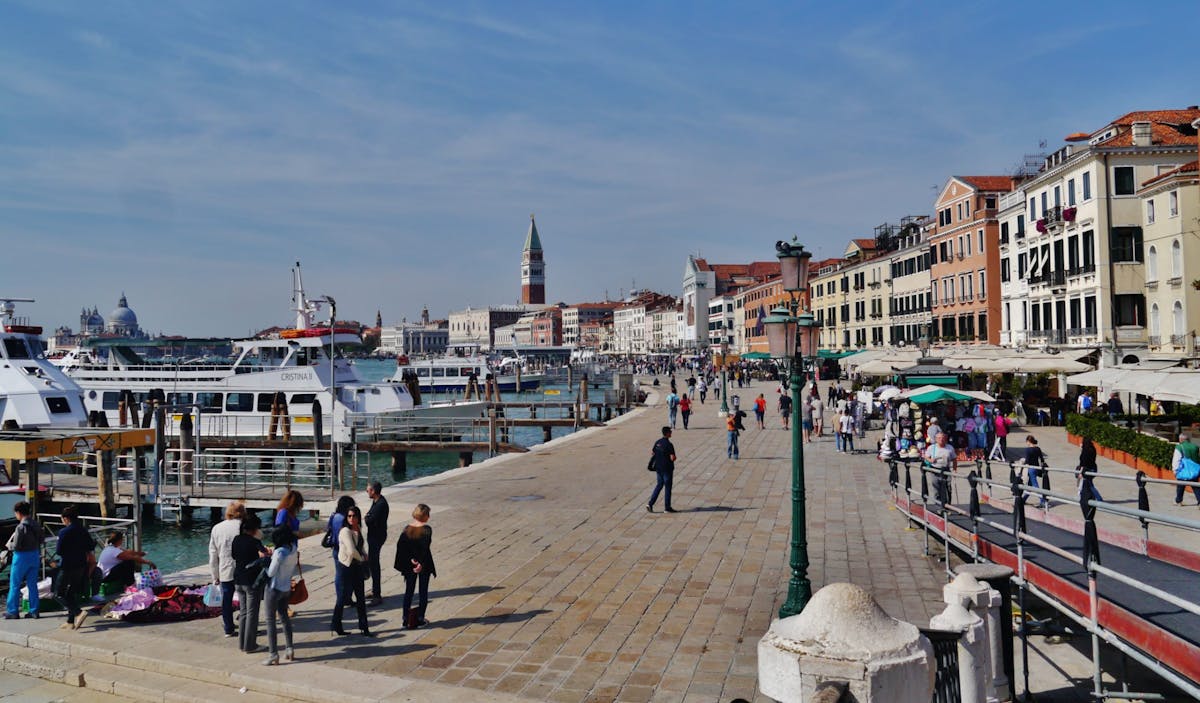 You are walking along the Riva degli Schiavoni, the Embankment of the Slaves, which refers to the Slavic merchants from the Balcan countries who worked here when Venice was at its peak; until 300 years ago you would have seen many merchant ships from the Balcan lands dock right here, and you would have been surrounded by people busily laying off fresh merchandise onto the land. This, along with much else, all stopped in the early 19th century with Napoleon’s take over of the city.

And soon after, with the unification of Italy in 1861, Venice became part of the Italian kingdom, although Venice was actually annexed as last in 1866 under somewhat forced conditions. In any case, you’ll see the statue of King Vittorio Emanuele the second, the first Italian king, known as “the gentleman king” for his honest and just personality.

On one side of the statue base is a woman representing Venice defeated, with the winged Lion gnawing at the chains symbolising the Austrian rule, and on the other the same figures now triumphant under Italy’s rule.

Here we are in front of the Chiesa della Pietà. In 13th century Venice, and in Europe everywhere, orphans were

unfortunately a common occurrence, as death in child-birth was frequent, and, often, families simply did not have enough money to raise a new-born. Venice was famous for taking care of its poor and its destitute, and this church you see was once a hospital and school for orphan girls, where they learned to sing and chant. The school quickly became famous in Europe for its girls’ choir, which the Venetian Antonio Vivaldi directed for over 40 years, writing some of his finest music for all-female choir ensembles.

If you peer in the calle to the side of the church, on the wall you’ll see a plaque condemning and even cursing whoever abandoned their children, showing particular vehemence against those who in fact had the means to raise them, not uncommon behaviour unfortunately.