San Giovanni in Bragora and Arsenale

Entering the peaceful Campo San Giovanni in Bragora, we see the simple gothic Church where Antonio Vivaldi was baptised, the red-haired composer who taught music to orphan girls in a nearby School and produced wonderful music, such as the Four Season violin concertos. On the topic of baptism, the Church is in fact dedicated to St. Giovanni Battista, the lone hermit who baptised Jesus Christ. However, it holds the body of another Giovanni, San Giovanni Elemosinario, the Charitable, even though there is actually a Church dedicated to this very saint near the Rialto Bridge. As the story goes, back in 1249, a ship with the saint’s remains was heading towards the Rialto as planned, but suddenly it stopped not far off this campo where we are now. As if under a spell, no one could get the vessel to move, until the priest from the Bragora Church came on board, and managed to dock it closeby. The convoy of people proceeded with the body on foot to the Rialto, but a terrible storm out of nowhere forced them to take refuge in this very Church. Once inside, it proved impossible to move the body of San Giovanni Elemosinario outside, and so it was decided it should stay here, where it has lain for the last 800 years. 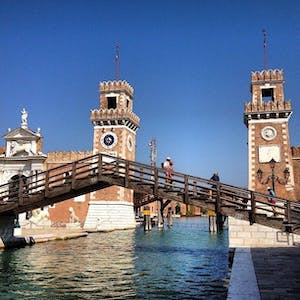 The entrance to the Arsenale, the first and one of the most powerful shipyards in history, where Venice’s military secrets were kept as jealously as those of any nuclear armoury is today. Its walls are still intact going two miles round, within which up to 16,000 people were in its employ, an indication of the city’s power and efficency; it was here, long before Ford in America, that the modern production chain was put into practice, if we consider that during the wars against the Turks in the 16th century, a new galley left these yards everyday for 100 days. The workers of the Arsenale were called Arsenalotti, and their knowledge of Venice’s military secrets was valued so highly that they alone were exempted from kneeling before the Doge. However prestigious this may seem, the work rate, conditions and heat were so tough here that Dante Alighieri even compared the Arsenale to where gamblers would burn in the Inferno of his Divine Comedy, as you can read from a plaque in his honour on the wall. The gate of the Arsenale is guarded by a row of white marble lions, but look closer to the tall one on the left. It came here from Athens around 400 years ago, where it guarded the port of the ancient Greek city. On one of its sides are scribblings which are certainly not Greek and had seemed illegible, until a Norwegian scholar on holiday recognised them as Nordic runes engraved by a group of viking soldiers in the 11th century. Think then that Arsenale itself comes from the Arabic for “workplace”, and we have here the epiytomy of the vast mix peoples and cultures that made Venice such a unique place in history.