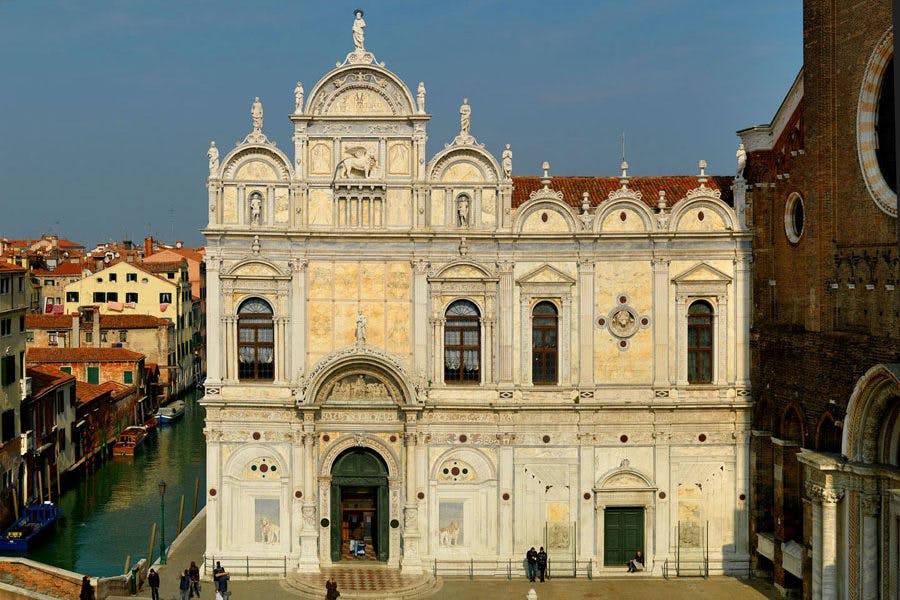 Ruskin called the mesmerizing façade of the Scuola Grande di San Marco ‘the most refined building in Venice’. The choice of bright marbles, spotted with porphyry red medallions, give a sense of serenity and calm; which is in contrast with the monochrome brick-façade of the Church next to it. There were once six Scuole in Venice, until 1806, when Napoleon closed all the Scuole in Venice. Nowadays, the Scuola di San Marco is home to Venice’s main hospital and is certainly the most beautiful hospital any patient could wish to be in. On the upper floor there are the living room and the hotel room, with splendid glass ceilings with golden finishes. Some canvases with stories of San Marco by Jacopo Palma the old and the young, Tintoretto, Nicolas Régnier, and the Padovanino have been reported in their original home.

In the Basilica of San Giovanni e Paolo, or of San Zanipolo as the Venetians call it, you can admire a white marble sarcophagus, with carvings of two angels and doves with crosses on them, dedicated to Jacopo Tiepolo. He dreamed about two angels accompanied by doves floating above a field covered in white roses, while a voice from above told him that was where he must build a church. Although Tiepolo’s dream might be more legend than truth, the church was built, and at the time this area was still swamp-like and not ideal to build such a monumental building as this one. The interior of the church preserves remarkable works of art as well as many funeral monuments of Doges and other illustrious characters of Venetian history, and several important paintings, for example, ‘Polittico di San Vincenzo Ferrer’ by Bellini and ‘L’elemosina di Sant’Antonio’ by Lotto.

In front of the Church of San Zanipolo you’ll find the bronze monument dedicated to the general Bartolomeo Colleoni as he rides proudly on his horse. It was sculpted by Verrocchio, master of the young Leonardo da Vinci. It is the first statue in history of a horse with one leg raised. The statue doesn’t portrait the man but the idea of a strong and ruthless military commander “bursting with titanic power and energy”. Colleoni had fought many battles on behalf of the Venetians, who granted him a place of burial anywhere he wished, so he requested his statue be placed in front of San Marco. Obviously, he meant the Basilica of St. Mark’s, but the Venetian state, always adverse to blatant individual idolization, decided to misunderstand his words, and place it in front of the Scuola Grande di San Marco. They did, in fact, do what he had asked, even if not what he had intended.

Discover the histories and secrets of the monuments with € 53, click here!