The Bridge of Sighs, the Clock Tower and Mercerie 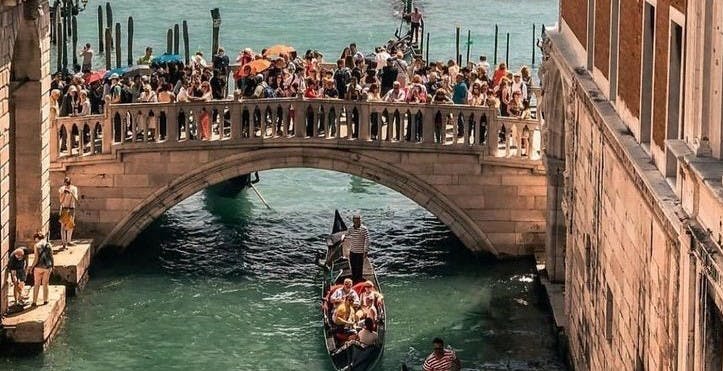 The Bridge of Sighs

You are now on the Ponte della Paglia, the Bridge of Hay, where boats would drop off stacks of hay for the horses’ stables inside the Palazzo Ducale on the ground floor. Which is also where, until the 16th century, the city’s prisons were located; and so for extra security the doge of the time had the prisons moved outside, to the building on your right, which was constructed for that purpose. In 1600, therefore, a bridge had to be built to connect the Doge’s Palace and the Prisons: the Ponte dei Sospiri, the Bridge of Sighs. Allegedly, the newly-judged convicts walking to their darkened cell, would look out from the window-gaps to the Lagoon for one last time and sigh.

The Torre dell’Orologio – the Clock Tower – stands above the arch leading to the Mercerie shopping street close to the Basilica. Built at the end of the 15th century, its brilliant clock-face and its digital clock are linked with automata, which attract crowds to the Piazza. On the summit of the tower two large bronze figures known as the Mori (Moors) strike the hour. During Ascension Week and at Epihpany, figures of the Magi emerge to either side of the clock-face and bow to the statue of the Madonna above it.

This long street is known as Mercerie, which mean ‘haberdashers’. In 1645 the writer John Evelyn’s account of “one of the most delicious streets in the world” describes that among the luxury textile emporia were shops selling perfumes and medicines too. Entering the Mercerie from Piazza San Marco, immediately to your right, you’ll see a bas-relief of an old lady dropping a mortar. In 1310, the conspirators of a famous failed coupd’etat had gathered here just before marching to the Palazzo Ducale, but a woman living here acidentally dropped her working tool which fell on the flagbearer’s head, killing him, which, in turn, caused the rebels to panic and disperse, thus thwarting the coup altogether. As a token of gratitude the State promised the woman it would not raise the rent as long as she or her discendents lived in the flat. Today the Mercerie is one of the most trafficked shopping streets in the city, where all big-name fashion designers can be found.