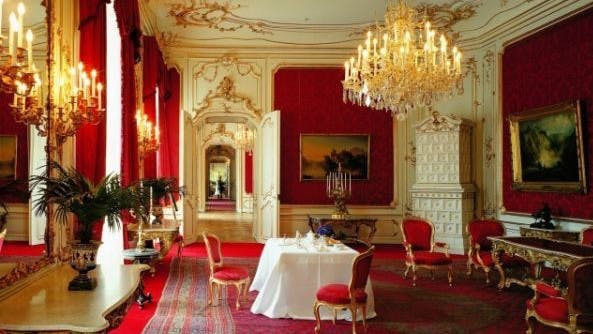 Ca’ Rezzonico, today Museum of Venice’s 18th century art, is one of the largest palaces on the Grand Canal. The ground floor and first floor were built by Baldassarre Longhena who died in 1682; the Bon family, who owned the palace, found itself in dire economic straits and had to sell it to the Rezzonico family, who had Giorgio Massari finished constructing it in the mid-18th century. The house had various famous owners, among which the son of Robert Browning, who incidentally died here during a visit in 1889. Today the museum is famous for its wonderful frescoes by Gianbattista Tiepolo, symbol of Venetian 18th century painting.

Now you will see Palazzetto Pisani, built in the 1500’s. The name comes from the wealthy Pisani family who bought it in the mid- 18th century, knocking down the wall that separated it from their much larger palace behind the one you see, so that they could boast a view onto the Grand Canal; until then, this building was home to the scientist and mathematician Giovanni Poleni, at the time a celebrity on par with Newton and Leibniz, and who also founded the faculty of Physics at the University of Padua, one of the oldest universities in the world.

You are now under the water entrance of the Peggy Guggenheim Collection, one of the most important art collections in the world. Peggy Guggenheim, originally from New York, arrived in Venice in 1949 and began to satisfy art addiction buying this wonderful building where she displayed invaluable artworks to the world. The beautiful terrace you see is where Guggenheim sun-bathed regularly looking onto the Grand Canal. While she lived here she had a daily routine of taking gondola rides around the city for no less than 4 hours at a time in the company of her beloved dogs. Despite this tranquil pastime, she famously led a life of unrestrained pleasure, and is said to have had over a thousand lovers in her life, among which many of the artists she patronaged. That said, she always felt her one true love was Venice, as she herself put it: “It is always assumed that Venice is the ideal place for a honeymoon. This is a grave error. To live in Venice or even to visit it means that you fall in love with the city itself. There is nothing left over in your heart for anyone else.”