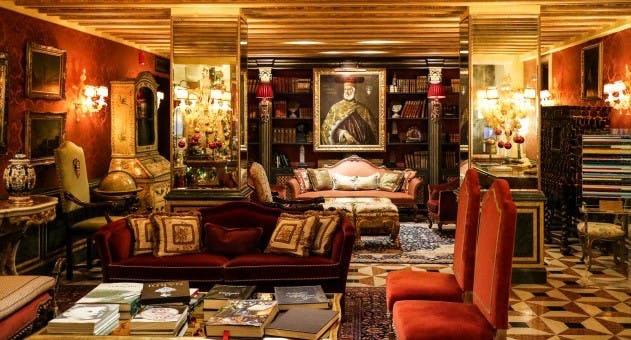 Ernest Hemingway called the Gritti Palace “the greatest hotel in a city of great hotels”: what you see in fact is the wonderful terrace of the hotel’s restaurant. It is hard to imagine a better spot in the world for a romantic dinner with delicious local food and wine.  The building itself was the residence of Venice’s Doge Andrea Gritti in the Renaissance, from whom it takes its name; became a hotel in 1895, over a century ago. Over the years, the Hotel Gritti has hosted countless characters from the cinema, artists, and writers. Hemingway famously staged a midnight baseball game in the hotel’s lobby—and instead of being reprimanded, the Hotel manager took 10 percent off his bill, since nobody had ever dared play the sport on the premises before. Hence, perhaps, his high-praise for the hotel.

Here, as you come into the Grand Canal you are opened to the Chiesa della Madonna della Salute. In the 17th century the Black Death ravaged cities across Europe, and had quickly wiped out two-thirds of Venice’s population. When the Plague was finally over, the Doge of Venice decided to build a church in honour of the Madonna as a thanksgiving token. And so, the task of building it went to Baldassare Longhena, who was only 26 at the time, and would become the most important baroque architect in Italy. The first thing that strikes a viewer is how imposing the church is, strategically placed at the entrance of the Grand Canal looking out onto the rest of the city in every direction, thanks to its circular shape. Longhena chosed the circular shape with the intention of offering a crown to the Madonna, with all its statues, buttresses and scrolls magnifying the pomposity of its architecture. Today, every 21 November the city celebrates the Madonna della Salute in memory of the end of the plague, a religious occasion which is reality a special occasion for the people to celebrate an all-Venetian event with a small funfair in the piazza outside the church.

Today the Punta della Dogana is owned by the art collector François Pinault, who has converted it into a Centre for Contemporary Art. However, until the 18th century, Punta della Dogana was once the Customs area where foreign merchandise ships coming in to the city had to pay their excise duty. Even the shape of this triangular strip of land resembles the prow of a ship, which separates the Grand Canal from the Giudecca Canal. Especially noteworthy is the Golden Ball on the tip of the building. The ball represents the world which rests on the shoulders of two Atlas figures. On top of the world stands the figure of Fortune, which rotates to indicate the wind’s direction, and of course the randomness of fortune itself. A perfect fusion of beauty and function, melancholy and irony: the essence of Venice.