The Gondoliers, Paline and Pirati and Palazzo Dario 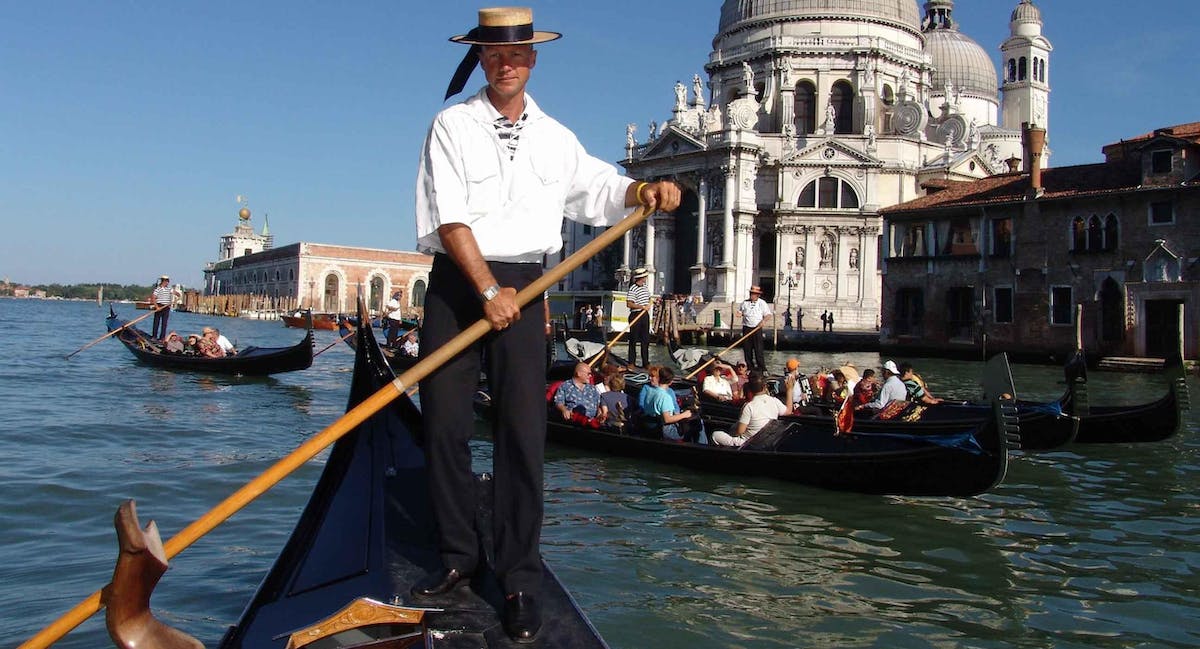 It is said that Venetians only enter a gondola twice in their life: their wedding and their funeral. Until the 18th century, gondolas were once mainly owned by noblemen under whose employ gondoliers would work for rather low pay. They were essentially taxi drivers, and so always abreast of the gossip  surrounding the city’s elite members, who went to brothels, gambling houses, or simply spent private time with their lovers inside the gondola’s felze, a covering at the center of the gondola which provided much-needed secrecy, today no longer in use. And it is precisely because they knew so much about so many, that gondoliers were excused for being loud and brash. Famously, when you turn a corner on a small canal, your gondolier will shout his “Oé” as a warning to other gondoliers, a sound which has become part of Venice itself. Gondoliers are extremely proud of their job and of being the upholders of a century-old tradition, which they also maintain by speaking strictly Venetian dialect rather than Italian.

The vertical wooden posts you see stick out of the water are called paline. These are spread across the Lagoon

and here on the Grand Canal are used to mark the shoal point, so as to avoid boats getting stuck in the mud. Alternatively, they are used as mooring stations for boats of all kinds. There are also striped coloured paline, which used to belong to noble Venetian households who would have them painted with their family colours. The wood used is one of the most durable in the world, however, the constant waves and tide movement inevitably have an effect. You can see some are consumed to half their size and covered in algae and mussels, perhaps reminding you of derelict contours in a pirate movie. Not altogether unsuitable given the rather pirate-like nature of Venetians in the middle-ages. Famously, in the 4th crusade of 1204, Venice looted from Byzantium much of what is now admired in St. Mark’s Basilica, such as the Madonna Nicopeia and the Bronze Horses looking onto Piazza San Marco, as well as many unique pieces decorating the city’s palazzi you see today. Of course, Venetians never thought of themselves as pirates but as merchants, although often the line can be rather blurred.

Along the Grand Canal we find Palazzo Dario, usually called Ca’ Dario, a palace with the Renaissance façade adorned with circular polychromatic marble medallions. Built in the 15th century for the Dario family, it immediately acquired the reputation of a cursed house. Yes, because almost all those who bought it were murdered or committed suicide in peculiar circumstances. At the end of the 15th century the house went to the daughter of the noble Dario, who married Giacomo Barbaro who was mysteriously stabbed to death shortly after, as well as their son Vincenzo. But it was from the 18th century onwards that the sinister fortunes of the various owners followed one another relentlessly. The Palace was finally sold by the Barbarians to an Armenian merchant, who enjoyed it very briefly since he was found dead shortly after he bought it. The house then passed to an English historian who died in the company of his lover, probably suicides; the same fate befell Charles Briggs, an American mining owner, who fled the United States with his lover after being accused of homosexuality. After him, an Italian art historian was killed by the 18-year-old boy who hit him in the head with a statuette. Others followed, including famously Kit Lambert, lead singer of The Who, who is said to have fallen down the stairs, although suicide is likely. In the early 2000s, Woody Allen showed interest in buying Ca’ Dario, but then, and luckily for him, he thought better of it. Among the various rumors, it is said that the Palace is inhabited by the ghosts of the past owners.