The Rialto Bridge: one of the symbols of Venice 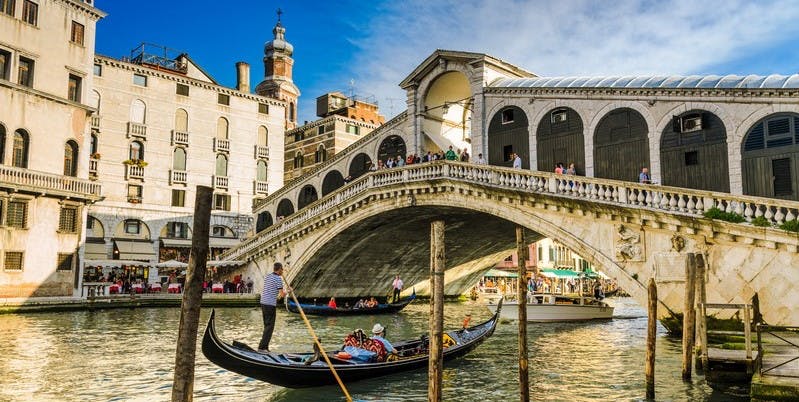 Venice: the “City of Bridges”

The origins of the Rialto Bridge

It seems that already in 1182 a boat bridge was built there by Nicolò Baratieri to make the market more accessible. It was called “Quartarolo” from the name of the coin which, it seems, had a hole in the centre and which had to be spent to cross it or perhaps because of the proximity of the Mint.

Around 1250 it was replaced by a structural wooden bridge, which could be opened to allow the passage of ships. Since the function of the bridge was closely linked to the Rialto market, its name changed to become the Rialto Bridge.
In 1310, Bajamonte Tiepolo and his faithful, after the failed attempt to seize the Doge’s Palace, had fled; they had arrived near Rialto and had crossed the bridge, which they then destroyed to prevent being reached.

It was rebuilt but collapsed in 1444 due to the weight of the countless crowds that had gathered to watch the procession of the bride of the Marquis of Ferrara.
It was always rebuilt in wood, in a larger form, with workshops and a mobile central part; at the beginning of 1500 it was so ruined that it was decided to build it in stone.

The Serenissima announced a competition for its construction and many people presented a project; Michelangelo, Sansovino and Palladio chose Antonio Da Ponte who was the builder, but only partially the creator (since in the funeral oration of the doge Pasquale Cicogna, written by Enea Silvio Piccolomini, it is stated that the merit of the design belongs to a patrician named Gio. Alvise Baldù).

The bridge was started in 1588 and finished in 1592 under the Doge Pasquale Cicogna, whose commemorative epitaph, surmounted by a coat of arms, is on the four sides of the bridge. Twelve thousand elm wood poles and larch planks were used to support the only arch of more than 28 metres of light; there are twenty-four shops and the wide central steps are in groups of five, while on the two sides there are two ramps formed by steps lower than the central ones to facilitate the passage to the trolleys carrying the goods.

The first bridge, which was formed by two larch ramps supported by oak poles, fixed in the bottom of the canal, was considered as a ferryboat between the two banks and, as we have seen, to cross it was paid with a coin called quartarolo which, apparently had a hole in the middle, the people ironically called it the “Tragheto del buso” because in the Rialto area there was the Castelletto reserved for the whores of the city; the allusion to the “buso” is evident.

Among the skeptics about the construction of the bridge two stories are told: a woman, in a rather vulgar way, claimed that it would never be built:

“No ‘l will never be the fate of this bridge, I hope this one (pointing to the lower abdomen) and I swear that I’ll take it if ‘l vegnara fate! (The bridge will never be built and if they finish it, I’ll burn it).

The Unusual Venice, discover the hidden parts of the city with € 23, click here!