PIAZZA SAN MARCO, ONE OF THE MOST FASCINATING SQUARES OF ITALY 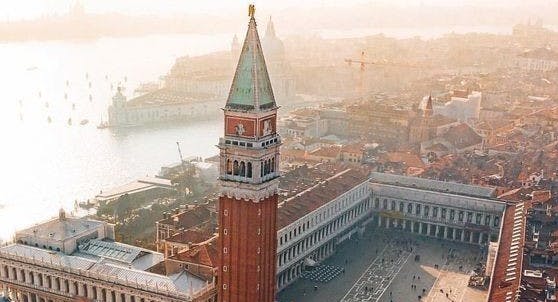 Piazza San Marco in Venice is one of the most important, beautiful and fascinating squares of Italy, renowned worldwide for its magnificence, its magic and its architectural integrity. In Venice Piazza San Marco is the only real square, because all the other spaces that recall the shape are actually defined as “” or “squares” fields. Piazza San Marco is a very large space, has a trapezoidal shape and is 170 meters long.

Napoleon called it “the most elegant drawing-room in Europe”. 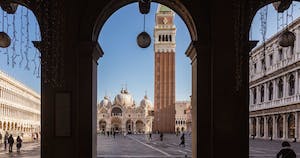 Putting themselves at the center of the square and looking towards the Basilica, you can see the following buildings: the Campanile di San Marco, the New Procuratie, the Napoleonic Wing, the Procuratie Vecchie, the Torre dell’Orologio, the Palazzo Ducale and of course the wonderful St. Mark’s Basilica.

The Square, the enclosed area between the Procuratie Vecchie and New and the Brand new , consists of beautiful and unique architecture of its kind, built on the monumental complex of the basilica with the famous Campanile di San Marco where you can enjoy a unique view and the round of the city of Venice.

Above the Palazzo Ducale and Basilica (already narrated in our articles) let’s go to discover history and curiosities about other important Venice highlights in Piazza San Marco. 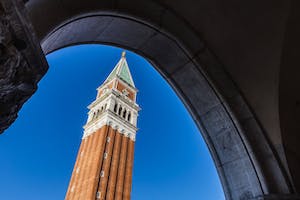 The bell tower is the tallest building in Venice: 100 meters high! The original tower collapsed in 1902, fortunately killing no one apart from the custodian’s cat. The mayor wisely chose to rebuild it “exactly where it was, how it was”. So, nowadays we can admire as it was centuries ago.

If you want to go to the top you should enter in “loggetta base”, built in 16th century by the great Jacopo Sansovino, which had to be restored after the tower collapsed. With the lift you will reach the top from where you’ll enjoy the breathtaking overview of Venice, the lagoon and the Alps! 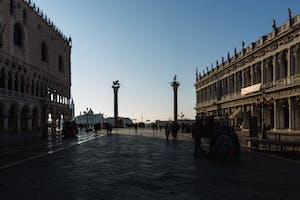 This space with the two pillars is called Piazzetta San Marco (small Square) and it is the entrance to the Piazza San Marco. On top of the columns there are the two patrons Venice: the winged Lion representing San Marco and the Saint Theodore slaying the dragon, ancient protector of the city of Venice.

The merchants brought them in Venice around the XI century, but spent over a century lying on the ground because no one really manage to erect them due to their weight and size. It was only in 1172 that the engineer Nicolò Barattieri had the idea of repeatedly wetting the hemp ropes tied to the pillars with water, which would then shrink and tighten, thus heaving them up to how we see them today. As award, the Venice Republic allowed Barattieri to practice gambling in the space between the two columns, otherwise it was strictly illegal anywhere else in the city. After his death, the space between the pillars became the venue of gruesome public executions, as a warning to the population. 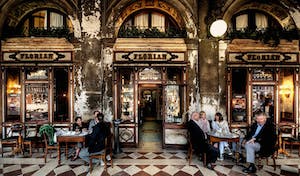 The oldest café in the world: founded in 1720, during almost 300 years, all of Europe’s famous personalities have stopped to enjoy a coffee here, from Goethe, Rousseau, Byron, Dickens to the locals Guardi, Canaletto, Goldoni and of course Casanova. The most famous lover used to come to Florian, for its quality but especially because it was the first café to allow entry to the women.
Florian has always been a place of innovation and modern ideals. It was here in fact the idea of a Café-live orchestra was invented, as well as the plan to start the first Biennale Art Exhibition in the late 18

00s’, and it was here, in 1848, that the Venetian patriots first declared the city’s independence from the Austrians.

The Clock tower (Torre dell’Orologio in Italian) – stands between the arch leading to the Mercerie shopping street and the Basilica. Erected in the 15th century, its brilliant clock-face and its digital clock are linked with automata, which attract crowds to the Piazza. On the summit of the tower two large bronze figures known as the Mori (Moors) strike the hour. During Ascension Week and at Epihpany, figures of the Magi emerge to either side of the clock-face and bow to the statue of the Madonna above it.