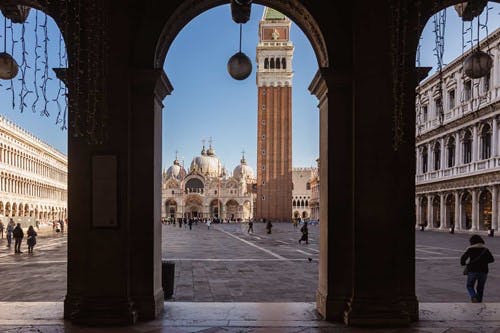 St. Mark’s Square: the only square of Venice

St. Mark’s Square (San Marco, in Italian) is one of the most important, beautiful and fascinating places in Italy, famous worldwide for its beauty, its magic and its architectural integrity. It is the only real square of Venice, as all the other  are actually called “campi” or “campielli”. St. Mark’s Square is a very large area, with a trapezoidal shape and is 170 meters long.

What buildings to visit

If you stay in the center of the square you can see the following buildings: the Saint Mark Bell Tower, the Procuratie Nuove, the Napoleonic Wing, the Procuratie Vecchie, the Clock Tower, the Ducal Palace and of course the wonderful St. Mark’s Square. Heart of the city and the symbol of the Venetian Republic, the monumental area of ​​St. Mark’s Square is composed of three major areas:

The heart of Venice State

As mentioned, St. Mark’s Square has for long been the heart of Venice State and has always followed the life, customs and rhythms of the city and its Doges. Once all the structures had a very specific duty: the Ducal Palace was the seat of government and the Republic supreme courts, as well as prison, where you can still see the famous Bridge of Sighs along which the prisoners walked before being jailed.

Between the two Marco and Teodoro columns instead, the executions took place, while from the “Pietra del Bando” the laws and decrees were announced then posted on the Charter door so that the entire population could read them. The Saint Mark’s Basilica was the center of the major religious ceremonies of the state, it preserved the holy relics, and performed the function of Doge’s private chapel.

The power, wealth and magnificence of the Saint Mark church were such that it had its own bishop, distinct from the Patriarch. The large and imposing square was home to parades and tournaments, festivals and parades, fairs and markets were held  and in the courtyard of the palace ran the bulls.

In the eighteenth century Saint Mark Square began to play a role more “wordly”:  the Carnival and the first historical cafès appeared, then after the Republic falled the palaces were occupied by Napoleon, then the Habsburgs and finally the King of Italy. Lately came the museum display of some structures of the Square with the opening of the Museo Civico Correr and after of the Ducal palace and of the Saint Mark Bell Tower.

Today, Saint Mark Square  welcomes every year millions of tourists from all over the world, it pampers them with its famous and sought after cafes such as Florian and Lavena, it amazes them with the grandeur and richness of the Byzantine-style Basilica facade, it entertaines them with the Carnival parades and celebrations, with the big concerts in the Square, with the most unusual and unforgettable events.

Do you want to visit St. Mark’s area starting from € 15? Click here!