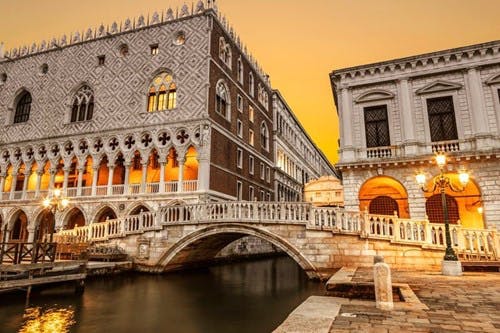 The huge prisons were made of large marble and Istrian stone blocks and were intimidating and frightening. Still today we don’t know how they were assembled. The palace was constructed in 1500 to create a more hygienic prison for the inmates and certain judicial functions of the Doge’s Palace were also transferred there. It was later connected to the Palace via the famous Bridge of Sighs which was built in the early 1600s as a replacement to the previous wooden connections.

The prison’s connection to the Doge’s Palace just goes to show how important it was to the performance of judicial functions. This is the first example in Europe of the construction of a palace exclusively for judicial and detention functions. The construction of the Palace was entrusted to the same architect who built the Rialto bridge, Antonio da Ponte, further highlighting the significance of the structure to be built.

Inside the palace there are several very narrow corridors and cells which were divided into different areas depending on the severity of the prisoners’ crimes and their wealth. There was also a women’s area and an infirmary as well as rooms where justice was served by special magistrates known as the Lords of the Night. The large portico we can see was a night-time shelter for many of Venice’s beggars and underprivileged inhabitants.

The prisoners lived in very harsh conditions, even if they were among the best of that period. A special magistrate was assigned to manage the prisons and a doctor with an allocated sickbay was always present to tend to prisoners. A priest also paid frequent visits to offer comfort to the prisoners. Unfortunately, these efforts were not enough. The condition of the prison remained very poor both for prisoners serving their sentence and for those awaiting trial.

The main problem was poor hygiene caused by overcrowded cells, squalid conditions and humidity. This caused the spread of all kinds of diseases, which were aggravated by the presence of insects and mice, a major source of distress for the prisoners. Given the low survival rates of living in such unhealthy environments, imprisonment was often a death sentence.

The prisoners slept on a bench and used a dirty bucket for a lavatory; the smell that pervaded the building was terrible. Throughout the year, the cells were periodically washed with vinegar and quick lime. The prison doctor was obliged to pay daily visits to the prison and to prescribe drugs. If prisoners could not afford the drugs they were paid for by the state.

What did the prisoners eat

The prisoners received wine and 2 half kilo loaves a day. Later on, the fresh bread was replaced by biscuit bread– the same that was eaten on board the galleys. Meals were improved when feasts for the election of the Doge or important magistrates took place. At the Carnival there was a tradition which involved cutting off the head of a bull and redistributing the meat to the prisoners.

Given the prisoners’ terrible conditions, there were also various charitable fraternities that helped them and gave them comfort. About twice a week they gave the prisoners extra food in the form of broth and meat.

Wine was a large part of the prisoners’ diets and they would often pay the jailers for it; for certain periods, a kiosk selling wine was set up in the courtyard for those prisoners who could afford it. Chained up and under the watchful eye of the guards, the prisoners could make daily trips together to the well in the prison courtyard where they would collect barrels of water.