A city on the water but without fresh water 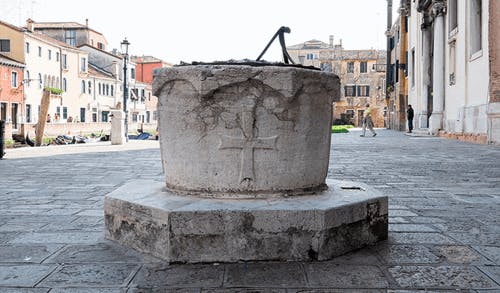 “Venice is in water and has no water”, said Marin Sanudo in 1500.
As Venice was surrounded by salt water but didn’t have drinking water due to its hydro-geological characteristics, wells were built all around the city to collect rainwater. The work was realized by the pozzeri brotherhood, belonging to the Masons brotherhood, and was financed by private individuals, under control and management by the city authorities. The government of the Repubblic overlooked the construction of wells, the fresh water supply (coming also from river Brenta as raining water was not always enough) and public health inspections, entrusting the keys of the tanks to citizens or to priests who had to open them twice a day and check over the quality of water. 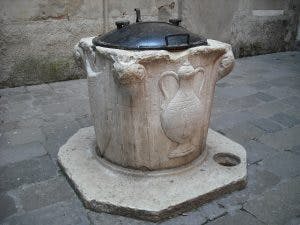 The word “vera”, is a typical Venetian term that defines the wellhead, the stone covering the well itself. At the beginning recycled materials were employed, brought from the city ruins of Altino. This is why the oldest wells have their top stone consisting of capitals and column sections. Many of these “vera” show effigies of the family that had the well built. The largest vera is located in Campo San Polo and measures 320 cm in diameter. In 1800 census counted about six thousand wells, but after 1884, with the construction of a proper water supply system, many wells were demolished, especially those made in bricks. Today Venice has about 600 wells, none of which is in use.

The Unusual Venice, discover the hidden corners of the city with € 23, click here!