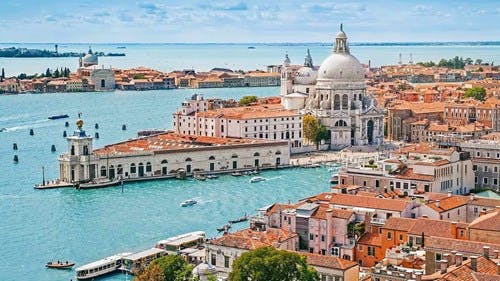 Punta della Dogana separates the Grand Canal from the Giudecca Canal. For its strategic location it was the house of the Custom and of the Salt Warehouses. During the fifteenth century, the Sea Customs House, which had previously been near the Arsenale, was transferred to the western point of Dorsoduro borough.

The building as it stands today was completed in 1682, five years before the nearby Basilica of the Salute. The building is typical for the tower surmounted by a sculptural group representing two Atlases lifting a golden bronze sphere on the top of which is Fortune, which, by turning, indicates the direction of the wind. The building continued to be a customs house, and thus intrinsically linked to the city’s history, until the 1980s.

In 2007 the city of Venice appointed Palazzo Grassi and the François Pinault Foundation with the task of transforming the building into a contemporary art center. The project was assigned to Japanese architect Tadao Ando that created his masterpiece.

A location created with a careful combination of modern and ancient elements, to enhance art in every single way. The museum houses the works of the Pinault Foundation. An event and a renovation that are contributing to make Venice one of the most important centers of contemporary art.

Discover the city’s romantic corners and their secrets with € 37, click here!