Venice and the Belle Epoque, the foreigner Simmel and Monet 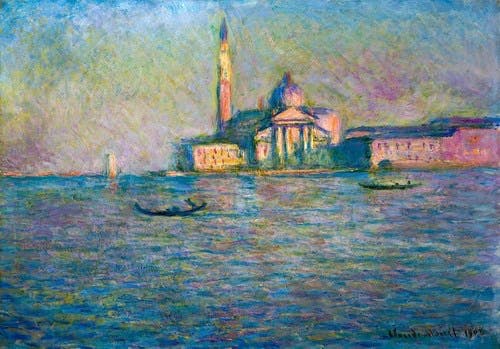 The old and the new clashed frequently, and were never to be reconciled in the twentieth century. Nor was Venice able to escape the vilification and ambivalence that appeared in the interpretations in the early century. But the old Serenissima was not yet dead: indeed there was renewed fascination with the eighteenth century.

Simmel and his essays 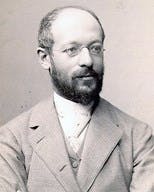 For the German sociologist Georg Simmel Venice was dangerous and unnerving as a result of its cult of appareances, its masquerade culture. In 1907 Simmel wrote comparative essays about Florence and Venice in wich he cast Florence as the male city, strong and manly, with robust palaces, and Venice as female, of course, severed from relationships, a shallow place of mere apparences.

Venice is the artificial city where the people walk, again, as if on stage that lacks extension to right or left. Nature is foreign to it, since greenery is absent and therefore the seasons make little impact. Simmel admitted that Venice was a unique order of the form of world consciousness. But it was a negative attribute in fact it constituted the tragedy of Venice.

He felt the proximity of the subconscious, and the irrational, and feared it, for it was compounded by the city’s very appareance, its geography, material life, its lack of nature, and transport either by foot or by gondola. The tempo of the city of gondolas and pedestrians was akin to the monotony of walking, wich made the experience close to dream and therefore unreal, without the jolts necessary to vitalise everyday life. A fateful ambiguity is born of the physical reality of Canals and Calli it is neither land nor water.

This is a life state, one of floating restlessness wich dislodges the soul and makes it homeless. While this disabling state creates the classic city of adventure, it is a condition of weakness, psychologically invalid, for it lacks of forceful tension, and male willpower. Simmel ignored the energetic financial life that Venice represented as much as did Florence.

Monet and his paintings

Claude Monet, famous French artist accepted the challenge of Venice in the first decade of the XX century. Claude Monet’s series of paintings devoted to the city were the fruit of a two/month stay in 1908. He was sixty eight years old when he came with his wife in Venice in hotel Britannia (now Europa Hotel), Madame Monet found its plumbing and electricity were magic. From Palazzo Barbaro, Monet painted across the canal to the Palazzo Dario, and the Palazzo Contarini.

In the area of the Bacino he painted Doge’s Palace and the island of San Giorgio. These paintings are a late point in a plain-air tradition, the summention of the habit of looking now so intensively personalized they becomes expressionistic, reaching beyond ordinary specifics of colors a and lights.

Discover 4 amazing tours that you can do at your pace starting from € 10, click here!