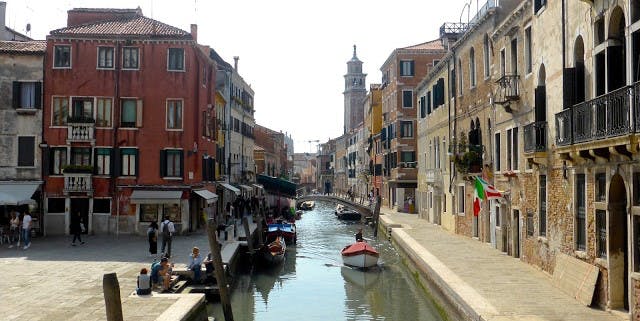 Since the 13th century Venice was famously divided between two rival factions: the Castellani, who wore a red hat and scarf, representing Eastern Venice and the Nicolotti, with a black hat and scarf, representing the Western part of the city. To settle a major religious dispute in the Middle-Ages, they planned to meet on this bridge, the Ponte dei Pugni, the Bridge of Fists and sort it out once and for all. The Castellani won, but it didn’t stop there, and fist fights would continue as sporting events, with judges sitting at the foot of the bridge, scoring points and checking for infringments. There were three types of fighting: boxing, where the first contender to lose blood lost the fight. Then there was the ‘frota’ which was a big brawl with almost no restrictions, and finally the ‘orderly war’, where the goal was to throw as many of the opponents as possible off the bridge and into the water. Until recently, bridges were made of wood and had no siderails. The whole thing came to an end in 1705, when a fight spiralled out of control and some contenders began using knives, stones and sticks, which were against the rule. They were separated by the priest of the nearby Church of San Barnaba, who came running out waving a cross in the air, screaming in a condemnatory frenzy. You will still see young Venetian boys throwing a punch or two as they cross the bridge. Locals still come here everyday, if only to pick up some fruit and vegetables at the greengrocer boat. 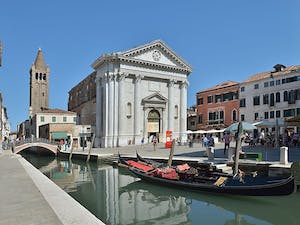 Campo San Barnaba, one of the liveliest little squares in Venice; any film enthusiast will recognise this is where Indiana Jones comes out of a manhole creating havoc among the unassuming tourists sat around the campo. The church is open but is momentarily hosting an exhibition on Leonardo Da Vinci’s inventions. Going back to the year 1441, a famous wedding took place in this campo, between Lucrezia Contarini and Jacopo Foscari, the son of a much-loved but disgraced doge called Francesco Foscari; their tragic family story was told by Byron in verse and later made into an opera by Verdi called I due Foscari, in which the father was forced to banish his son from the city for a crime he did not commit, soon after which both father and son die in solitude.

On a lighter note, if you approach the archway leading off the campo, above it you’ll see the Casin dei Nobili, one of the many gambling houses which flourished in the city, despite it being completely illegal. Looking up from the pavement to the ceiling, notice a round hole which the custodian would look through to check for the arrival of any new-comers or, most likely, law enforcers.

The church has two façades and main entrances, probably to separate the Nicolotti and Castellani, the two main factions in medieval Venice.

The Campo is on a higher level as it was once a large cistern for the collection of clean water, always a tricky thing in such a marshy environment. It is noteworthy that this campo has three well-heads, where most only have one.  The most talked of is the oldest one closer to the canal on the grassy patch. One summer morning in 1780 a maid from a nearby household came here to fetch water but instead found the body of a man, with no limbs or head. The other body parts were soon found in other wells spread out in the city. The head was quickly embalmed and placed in public, and sure enough the deceased’s brother recognised him; the body belonged to an unfortunate man who was murdered by his wife and wife’s lover in a gruesome act of violence. The assassins were decapitated and the lover’s body was dismembered as a sign of retribution.