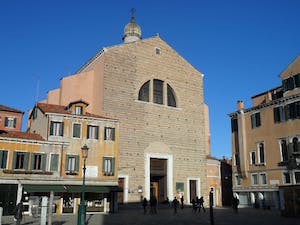 Here we are in Campo San Pantalon, with the church dedicated to Saint Pantaleon, a priest who was martyred in the 3rd century for trying to convert people to Christianity in Anatolia, or modern Turkey.

The brick-façade gives it an air of simplicity, completely opposite to its interior, which holds the largest painting in the world, spread across the whole ceiling, with a depiction of San Pantalon’s martyrdom. And this is not the only record this church holds, as in a small chapel is kept what some believe to be one of the nails used in Jesus’s crucifiction. Now, if you look to the canal and go towards the building on the edge of the water, you’ll see a plaque outlining the sizes of fish that people were legally allowed to sell in Venice. Vigilant as ever, the state’s penalty for infringement would have been quite harsh.

Aside from the Rialto, Campo Santa Margherita is probably the most popular place for an aperitivo or a night-out in Venice, surrounded as it is by bars and restaurants.

You’ll most likely see students milling about at most hours of the day or night since Venice’s main University is spread out all around the nearby area. Even the old church of Santa Margherita at the narrow end of the campo has now become the university’s Auditorium, and is mainly used for international conferences.

Even before its student days, this campo had always been a busy space, being the centre of several businesses, as any calle leading off the campo will tell you: there’s Calle del Fontego, where flour was produced, Calle del Caffettier, who sold a black medicinal beverage, called coffee; Calle delle Carrozze, if you needed a carriage built to travel to the mainland; Calle dei Caldereri, who built braziers, boilers and even bronze church-bells; and Calle del Pistor, where bread was kneaded before being sent to a Calle del Forno where it was finally baked. And most importantly the building in the middle of the square was the Scuola dei Varoteri, who traded in fur. The name comes vajo, a rare Siberian fox who apparently made great rare fur products, which the varoteri would sell for great sums, enough at least to afford such a priviliged business location.