Skip to primary navigation Skip to content Skip to footer

The Secret Itinerary of the Prisons: Cells, Tortures and Instruments of Punishment

Discover the 16th prisons of Piazza San Marco, created in 1500 and linked to the Doge’s Palace through the famous Bridge of Sighs.

An amazing itinerary in which you will be accompanied through places never visited until now: enter in the in the imposing courtroom and in the dark cells, you will discover the lifestyle of the prisoners, what they ate, drank and where they slept.
See the authentic graffiti left by the inmates and listen about the exciting Casanova’s jailbreak: he managed to escape from the maximum-security jail known as “Piombi”!

The Palace is “populated” by life-size figures of the Lords of the Night, prisoners, Judges, Lawyers and all characters who worked in the Prisons made meticulously drawing them from ancient manuscripts.

You will enter also in the scarry torture rooms with real torment itmes used by the Venetian Police and judges to make the criminals confess!

Listen to the myths and legends that still live inside these cold cells and halls. Along the route you’ll enjoy the explanation of the powerful “Council of The Ten”, composed by the highest Venice Politicians that oversaw the justice in all Venetian domains.

Since the birth of the Republic, Venice has been always careful to the administration of justice, of which used to do proudly with own judicial system. composed by courts, lawyers and magistrates. One of the main points was the Lords of the Nights: the terribile Venetian police used to resolve fights and punish the perpetrators of crimes.

You will discover the alternative that prisoners had if they wanted to stay in a cell or serve their sentence on board a Venetian Galley, each year of boarding as Galeotti was worth as having been 2 years in a cell.

The route arrives until today and the many cultural activities that take place in.
Nowadays the Palace, that overlooks the stunning Riva Degli Schiavoni, is home of an important Venetian cultural institution. 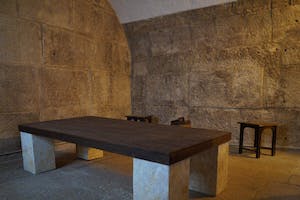 Venice: 1600 years of secrets, mysteries and hidden treasures to discover

Explore the historical areas of “The Floating City” with this essential guided walking tour of Venice! This tour transports you to the Venice of centuries ago,

A guided tour in one of the most majestic cathedrals of the world: The Saint Mark’s Basilica!

Enjoy a guided tour of Palazzo Ducale and the stunning Bridge os Sighs, Admire Venice from an exclusive view!